Finally found one of these, while I do not collect Disneyland I always wanted to get a set of these plates. I have a fantasyland one already so now the rest to go. Anyone have a full set? how many are there?
Have A Great Holiday Weekend
Posted by tikiranch 4 comments:

Digging thru the garage I had forgotten I had this great sign.

Now where to put it?
Posted by tikiranch 1 comment:

hope to see you next week for more from tikiranch.
Posted by tikiranch No comments:

Howdy Folks
Just wanted to post a shot of the shops booth at the show this weekend. Space is tight with all the stuff.
Posted by tikiranch 1 comment:

The Glendale All American Collectors Show

Howdy Folks
Just a quick post to invite all you local readers to the Glendale All American Collectors show this weekend. I will be set up with all kinds of neat stuff you can't live without. So drop by if you are near by won't you? My booth is in the snack bar area toward the back. Here is the website address for more info.

See you there.
Posted by tikiranch 2 comments:

Many things to do in the next few days so I am taking a week or so off posting to my bloggy blog blog. See you soon back at the ranch
Posted by tikiranch No comments: 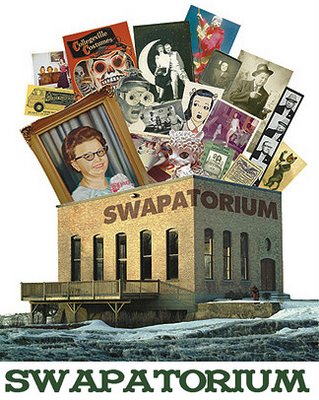 Hello everyone! Today I am a guest blogger over at swapatorium. Angelica has a wonderful blog and was one of the reasons I started up Tikranch. Please drop on by and check it out.
Posted by tikiranch 1 comment:

click the pic for a better look
Posted by tikiranch No comments:

So I get all these email just wondering who this Tikiranch guy is? So today I decided to take a self portrait. Now if you see me at a swap meet or antique showyou will know who I am.
Have a great weekend everyone.
Posted by tikiranch No comments:

I finally have a big desk to clutter up with useful vintage things. Now this vintage front desk penholder from some Motel or Hotel keeps a pen handy and in reach.

The copy reads
"Welcome!
Why not telephone the folks back home to let them know you arrived safely."

The little phone is ceramic and does not actually operate.
Posted by tikiranch 2 comments:

Going thru some older photos I used to take of my collection I came across this one. Years Ago there were 2 custom made animation reference figures made for the Hostess Company that were for sale. Some of you might have seen the Giant Twinkie the Kid figure which has been in a few of the Adverting Figures collector books. I missed getting that one but I did get this one of Captain Cupcake. The piece was made of some sort of resin/modeling clay and had a material and paper outfit and hat. The piece was about 10 inches tall and could stand on its own. I kept it for a while but at one point I decided not to keep figures made of cloth ( pillow Dolls) and the Captain was also one I ended up selling. I have yet to see anything else turn up like it so my guess is he was a one of a kind piece.

I am still looking for a Twinkie the Kid statue, that one looked like it was made from a mold and not a handmde piece.

Thanks for dropping by the ranch have a great day.
Posted by tikiranch 4 comments: