So quite a few months ago a dealer at the Rose Bowl showed up with this huge collection of printed/die-cut samples of about any product you could imagine from the 1940's. Everyone went home with a group they were lucky to get in the frenzy that happened that morning. I bought a potato chip box, a few Disney character boxes and another warner bros box with Porky Pig. Most of the load were non-character boxes but all were super colorful and cool designs. So fast forward to this morning and here is the same dealer at the special 5th sunday Long Beach show. I walked by his booth early and there were a few shoppers looking thru what looked like matchbooks. I kept on hunting thinking on dropping by later to take a look. I did return and found out those things I thought were matchbooks turned out to be matchbook sizes original hand painted art of over 300 different packages!!! So my thinking was buy them all, which was a good idea until me and the dealer were about $1200 apart as to what I offered and he reluctantly told me he wanted. Oh well it was not going to happen so I walked on and figured I drop by later that day and see what was left.
I came back toward the end of the day and still there were a load left but most of the ones I liked had been sold. Trying to hold back I decided to just buy 1 that I had eyed in the morning that was left.
. 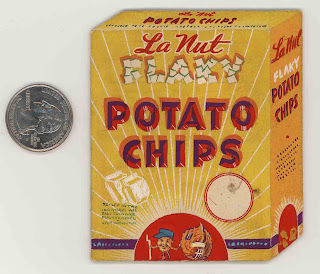 A work of art all hand painted from the 1940's, they must have had some small brushes and steady hands back then.
I know you all want a picture of the whole table right??? that was my idea too but unlike most people that come in my booth and just snap away with a camera I make it a point to ask first. We this is the how that went down after I payed him the $5 for this one.

Me: Do you mind if I take a picture of the collection?

Dealer: What are you going to do with it?

Dealer: Sorry I am not comfortable with that.

I did send my friend Vince to sneak a shot but he was unable to get one either , he said to me " I tried but he would not give me an open shot like he knew what I was trying to do"

so sorry folks I only have the one to show you but don't say I did not try both ways.....

Next time I am just whipping the camera out and go at it Paparazzi style and bolt.
Posted by tikiranch

Whoa, sounds like it was a pretty incredible group. And this one is fantastic, so I can only imagine what the other ones must have been like!

i got yelled at for the first time, shooting at item at the Brimfield Antique show in MA. The woman said "you know sir, thats not really right..."
Never had that happen before---guess i dont know antique show decorum!