Going thru some old files on my computer and came across an old want ad I did for the Advertising Figures I was searching for back in the year 2000. The search was getting easier as Ebay had been getting more popular and that meant more opportunity to score a rare piece. Looking back that was also the time some of the high dollar figures ( Like the large Speedy Alka Seltzer ) that were thought to have been quite rare started turing up more often and the prices crashed. These days I enjoy what figures I have but have not been going crazy adding new ones partly because the ones I want still have big price tags or they just do not turn up anymore. I took the ad I did over 10 years ago and took out the ones I have,had ( ended up selling for some reason) or passed on ( too expensive) and left the ones I have yet seen for sale at any price. There might be a few that I just wanted if they were cheap ( Like the 2 faced Ritalin monster, Mido Robot Clock, came close with a response off a blog post but as usual the deal never came thru) but have not come across yet at a fair price. Maybe this coming year I will take all the other pics I have saved over the years and make a new want list then see where I am in 10 more years. 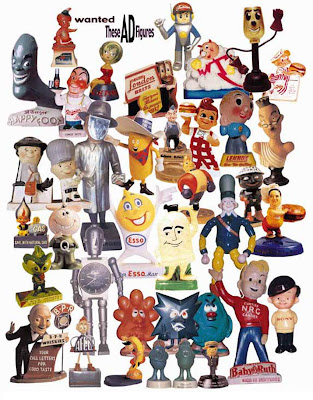 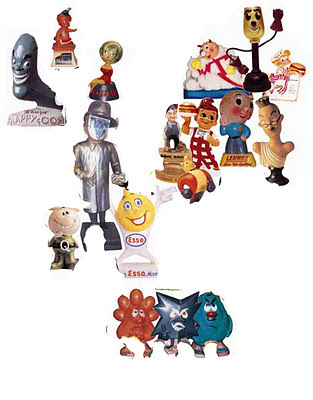 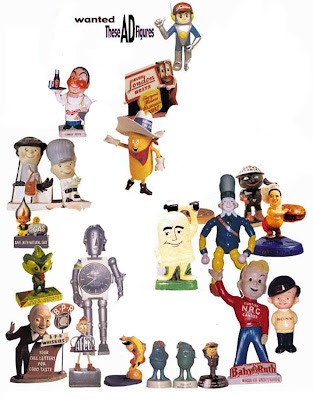 Wow, you've added some great ones! Quisp, that darn thing is never less than $400 when I find one. The Denon Space Girl is probably one of my "MOST WANTED" figures. And that Reddy Kilowatt, rare rare rare!

I don't even recognize some of your "still looking" figures. Is that Choo-Choo Charlie (and friend), for Good 'N Plenty? Rocky Taconite, he is usually $400 and up. The Ritalin figure is one that I didn't buy when I first saw it at $75 - and ever since then I have been kicking myself. Buffalo Bee, never seen that one!

Yes there are a few that are most elusive . The Choo Choo Charlie might have been some sort of store display figure ( as is the Twinkie the Kid Statue) I think I have only heard of 1 or 2 in all the years I have been collecting. The Buffalo Bee was a Sebastian promo figure and was possibly a prototype only know of 1 out there. The Rocky nodder is one of the last few ad nodders I have yet to get along with the killer Gas genie nodder. Fingers crossed for 2012 ad figure hunting.