I thought since Today is

I would repost this one I did back in April 2010
Once in a while while out hunting the swaps something happens that trips you out. In the past I have found some great thing by taking at turn down one row instead of another. You think about it later and it almost seems like it was meant to be for some odd reason or another. Coincidence or chance favoring your route that day at the show paying off with a new find for your collection that you otherwise would have passed by. Well yesterday was a doozie, I was in a booth and bought a small photo album ( Some great pics to share later this week) and some old keys. The booth was split between 2 dealers so the other side was a vintage paper dealers with just boxes and bins full of all sorts of old paper. After I paid for the album and keys I was poking around the paper and thinking "Randy you have enough paper stuff move along " so heading out of the booth I see a box full of vintage business cards and there is this one with a doughnut on it. I kinda like the early doughnut shop stuff so I pick it up and take a look. 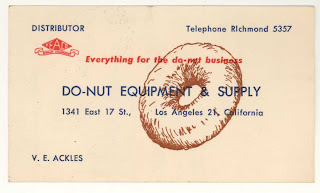 My Grandfathers business card from his supply business. Wow what a weird feeling came over me sort of a shock. We have been living in their home for about 3 years now so maybe it was his way of saying hello remember me?
I always will.
Posted by tikiranch

That's brilliant!
Wish something like that would happen to me.

Great story and discovery! You are so right, little choices can lead you to things you can never predict.

That is amazing. It gave me chills!
What a super find too.

Wow. Sometimes coincidences are just too weird to be coincidences I think...lol...sometimes they just have to be meant for a certain somebody to witness, as in this case.

How cool is that! There is some kind of cosmic connection in the thrifting/antiquing world.

Once I found an adorable pin - fell in love with it, had to have it. Was more than I usually spend on a thrifted item. On closer examination, it had my mother's name engraved on the back of it.