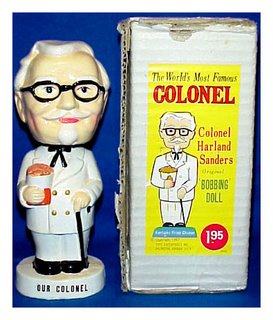 One part of ad figure collecting is all the great Bobbin Heads they made. Here is The Kentucy Fried Chicken Colonel. The neat part of this one is the orginal illustrated box. Most of the nodders just came in a plain cardboard box with a label or imprinted name on the end. I had the Colonel by itself for many years and was luckcy a few months ago to get 2 nodders and the box as a buy it now on Ebay for 65.00. I was able to upgrade the boxless one plus had 2 extras. A big thanks go out to Angelica at Swapatorium for the link on their blog. Have a great day everyone.
Posted by tikiranch

Very best site. Keep working. Will return in the near future.
»